XinFin. Currency of the future

It’s obvious – traditional finances are being redefined in front of our eyes. Once impenetrable institutions such as banks and hedge funds now have new competition in the form of cryptocurrencies that have many interesting features. Because in which bank can we make an anonymous transfer or set up a deposit with 100% APY?

Such things didn’t exist before because there was an army of intermediaries behind the large institutions, each of whom had to cut a piece of the cake. In the world of cryptocurrencies and blockchain, this is what we try to eliminate. Then, we can sleep peacefully knowing that if our insured house burns down, we will surely get compensation without having to deal with letters and officials who will try to convince us that it’s our fault.

So let’s take a look at why cryptocurrencies have actual value, where XinFin excels, and how you can start using it.

How is fiat currency different from cryptocurrency?

Until 1973, the US dollar was backed in gold. That means when we went to the bank, we could exchange our dollars for a certain amount of gold. On the one hand, this was good because the money actually represented some physical value – it prevented too much inflation and unlimited printing of money. After 1973, the American government abandoned this idea and made the dollar a so-called liquid currency. The dollar was the last currency to be backed by gold.

Money currently represents commonly accepted value. We can buy various goods with a piece of paper because everyone agrees and accepts it. The same is the case with cryptocurrencies. Before blockchain was invented, there was a problem with that, because a centralized institution is just a bank. Blockchain allows to create a very secure structure that people trust and thus agree on the value represented by the cryptocurrency.

XinFin, or eXchange inFinite (infinite exchange), is a Singapore blockchain. A next-generation technology that connects users around the world. First of all, it is a blockchain compatible with Ethereum, which is currently the second most popular blockchain. For non-technical people – thanks to this, we can easily trade the XDC token, which is the native token of this blockchain, with any other that is part of the Ethereum ecosystem (i.e., the majority of them). We can also easily add it to Metamask, the most popular crypto wallet. These are two big pluses.

The third undeniable advantage is the incredibly low power consumption, which is more than 10 million times less than bitcoin! This makes XinFin one of the most eco-friendly cryptocurrencies.

As for the rest of the specification, the Proof-of-Stake mechanism was used to secure the blockchain, which allowed for an additional reduction in power consumption while still providing excellent security. In most cases, this also means very low transaction fees, usually 1/100 of a cent which, compared to tens of dollars in Ethereum transaction fee, is basically free.

How is it different from other cryptocurrencies?

Now let’s take a look at what makes XinFin stand out.

XinFin primarily targets financial institutions, introducing a lot of nuances aimed at them. First of all, XinFin uses the ISO20022 payment messaging standard to ensure compatibility between its blockchain and financial institutions. This means that banking messages and messages from this blockchain can communicate with each other and programs called smart contracts can be created. Eliminating the need for trust, the code once put on the blockchain cannot be changed or hacked. You can also easily view the entire content of such a program.

The XinFin hybrid architecture enables support for public and private blockchains that can be used for virtually any purpose. Until now, XinFin has been used to support remittances, blockchain-based insurance, digital identity linked to online assets, end-to-end land registry management, and more – demonstrating the platform’s versatility.

For things that are a bit less unique, but still very important, we have to point out that XinFin is doing brilliantly looking at the fundamental parameters of the blockchain. In their specifications, we can see that they are able to handle over 2000 transactions per second, the transaction fee is practically non-existent, we only have to wait 2 seconds for transaction confirmation, and the power consumption is 10 million times less than the bitcoin electricity consumption!

You can see the comparison in graphic form below 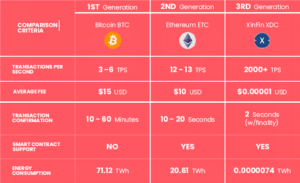 How to buy and start using XinFin?

When it comes to buying it, the best way to do it is on one of the larger and safer exchanges, such as Binance or Coinbase. Afterwards, you can send it to Metamask. 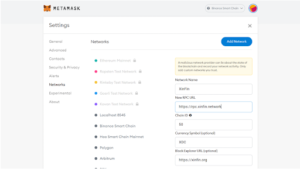 … XinFin is a blockchain that we use at Mateico. After carefully analyzing the available alternatives, we found XinFin to be the most suitable for our project. It offers a high transaction bandwidth, has minimal transaction fees, and the most important reason for us – it is very eco.

It will allow us to meet our requirements, and its general availability will give artists cooperating with us a large exhibition, allowing them to easily and efficiently sell their works.

Are you an artist? Create even better experiences and sell even more with Mateico solutions

Dress for Success. The fashion industry in the NFT world